The Garden Conservancy has filled a niche in American life with glimpses of fine gardens, enough for every perspective. From large acreage estates to simple plots, one can see what's happening in the neighborhood. So when my friend Juliet asked if I wanted to take a ride to the Steinhardt open garden to see the Japanese maples, I agreed at once. How better to see fall's palette than a hillside of the manicured maples!

The ride down was pleasant, with increasingly better sightings of understory color as we progressed south. As we parked we were closely observed by the resident camels...yes I said camels. I can't imagine what the caravan thought of the hundreds of humans who descended next to their ring. One in particular kept an eye on us while looking aloof and cool. Children were grouped in competition, staring back at the train, who were flanked by a zeal of skittish zebra. 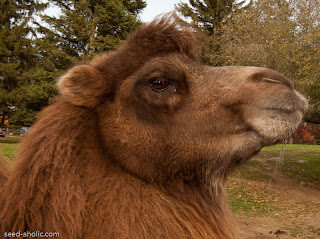 We check out the rock garden first, of course, but quickly meandered on to the maples, which blazed across the pond. Clearly the genius of the place was in that hillside.

As we meandered up the hillside, we saw the understory reveling in its turn in the sun. The canopy of the forest had shed its foliage sometime earlier in the week. The small maples were now center stage. 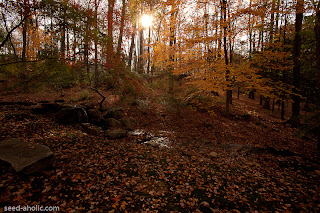 The moss bridge was quite interesting. I noticed they placed a butyl liner underneath the moss, then added a layer of moss and wood steps right out of Tolkien.While it looked fragile, it handled most of the hillside traffic. I noticed one woman with a stroller watchfully stomping on it. Then she scooped up her child to clamor across quickly in case it gave way. 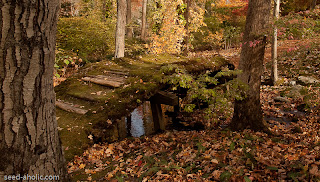 And everywhere the eye might rove, there were the small maples. Nothing whispers "fall" like a breeze through the understory Japanese maples. 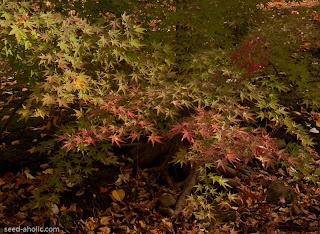 Many of the trees were festooned with Hydrangea anomala petiolaris. It was as if they pulled on fuzzy leg warmers. The soft breeze kept the forest fully in movement. 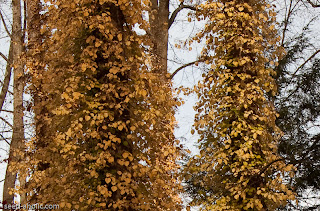 Of course there was a classic salute to Japan with stream, bridge and maple. I started to cross the bridge, but it was too slippery. Maybe moisture from the stream clings since there is no direct sun to dry it? 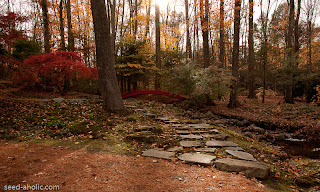 One delight of Japanese maples are the wide palette of colors as the leaves turn and drop. Yes, one can collect specimens with variously colored margins that present contrast all summer. I recall seeing a stand-out assortment in Harold Epstein's garden. But no matter, in fall they all flood the eye with saturated color. 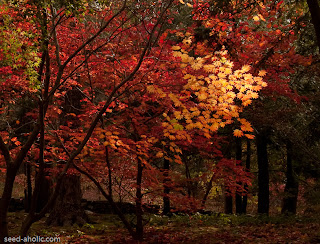 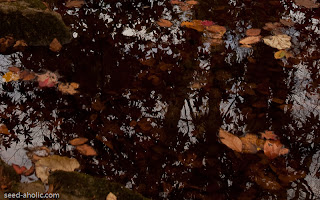 There seemed to be several springs feeding the hillside -this is pure conjecture - it might have been all man made. At any rate, there were several streams of water flowing down the hillside, providing ample places for a sampler of Japanese inspired bridges. 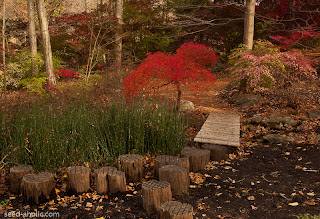 And at every turn, the maple color continued to saturate the eyes. But unlike the sun, they did not burn, but filled the eyes with contentment. 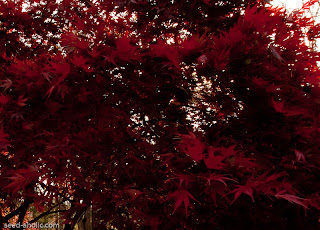 Wandering along, up and down across the hillside, we came to a waterfowl habitat. The local residents were for the most part enclosed by a large twisted wire fence. We are not talking an ordinary pen, but something telephone poll in height and large ponds in length. This friendly little swan, with white petticoat peeking out from under, was in the upper pond, outside the fence. I understand black swans are inhabitants of Australia, so one assumes he was here for the long duration. 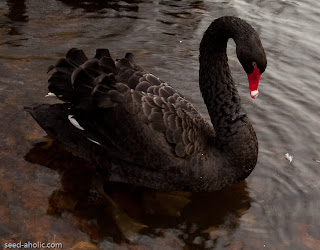 At the end of the wildfowl preserve was another enchanting scene of fall-colored understory. We met one of the garden designers (and builders), Carole Rocherolle, who documented quite a bit of the project in her book The Landscape Diaries: Garden of Obsession. It's a fun quick read that gives a whiff of the place. After a peruse, my husband is ready to see it next year. 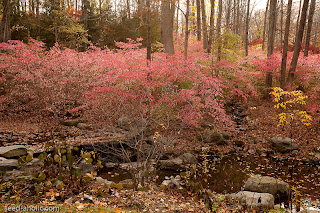 After one last look at the island before we said adieu,  it was back to our own gardens. For my part, I am anxious to cultivate a moss garden. Perhaps there will be room for another Japanese maple? The Steinhardt garden will again be open in the spring for Garden Conservancy. It is easy to come away after a day of enrichment with ideas to play out in your own backyard. Life is rich and full. Enjoy. 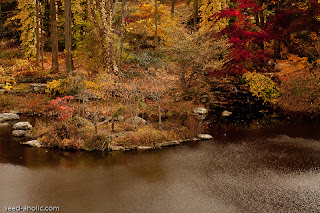 Panayoti Kelaidis said…
Ahem....a ZEAL of zebras....like a pride of lions I suppose. Elizabeth, you have taught me things I never suspected!
November 6, 2010 at 5:01 AM