Recently someone made an offhand statement about lack of color for the rock garden in July. That set me thinking. Ok, it's there, but not all of it is showstopping.  To my mind, plants give us performances. In the early spring there is a symphony of delights, from color and fragrance, to quantity and staging. By mid-summer, performances are more distinct, individual recitals.
Callirhoe involuctrata a mid-summer specialist, really takes off in the heat, growing inches every week. This prostrate vine creeps amicably about the sand beds. Growing it lean keeps its delicate figure in bounds. It carpets the sporadically blooming Clematis columbiana columbiana (named as it came from Norman and a western seed society, but maybe really just a C. integrifolia).The callirhoe then runs on around the arenaria buns. The color is well suited with the hardy annual Eschscholtzia californica v maritima which sits nearby. Opposite, it snakes through the robust Oenothera missouriensis. 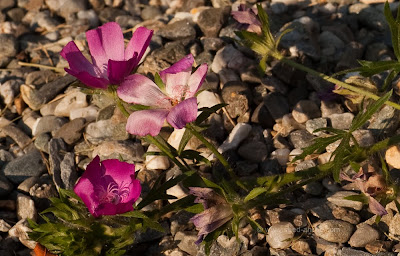 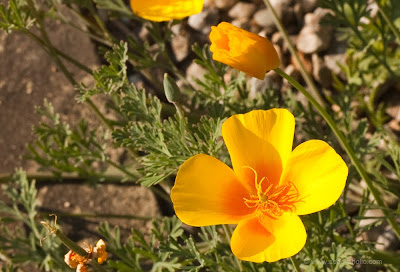 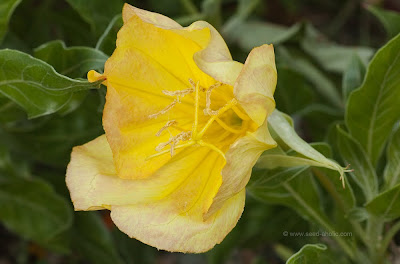 Campanulas come into their own in July. C. cochlearifolia alba, a dainty looking little bell, begins the month with glowing reports, running here and there in the cracks. I would not call it invasive, but it does get around. It thrives in cracks and niches, best kept away from the bunn-aries. 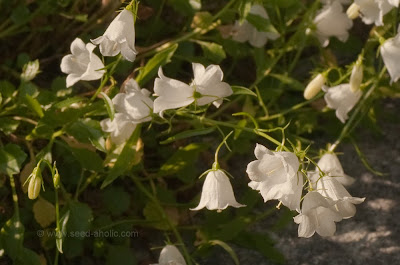 Campanula cochlearifolia alba
Much more sedate, Campanula waldsteiniana does well in a trough. It occasionally will seed but I have taken a division for the ZZ raised beds, where it seems to be thriving.

After the heat broke this last time, the daphne put on a second flush of bloom. We do mourn the recent loss of a favored D. arbuscula, set hanging from the south end of the raised limestone bed. It gave 12 years of spectacular recitals, and a great one earlier in the season. It was moved from my old house while still young and vigorously assented to its new home. I have not yet had the heart to pull its browned remnant. But another of its species lies close by. Its second round gave just enough color to brighten. 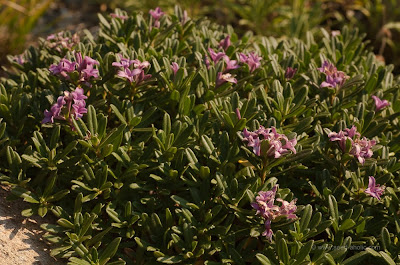 Nearby, one level higher in the rockwork, the unknown daphne is splendidly floriferous. Seems to me there are more blooms now than earlier in the spring. What a gem it is-perfectly prostrate creeping ever upward. there is no scent discernible to me, but that can be a plus about now.

Blues are big in this month - from delphiniums to gentians to platycodon, to name a few. The delphinium came to me from the exchanges as D. nuttallianum, but I am not so sure. Yes, it has been seeding about.
Are you familiar with the dwarf platycodon? A great do-er, it is easy from seed. Check the exchanges. Sometimes self sown seedlings will revert to taller versions. I have kept a few of these in one area far from the pack. The "main scene", however is always rogued to a neat 6 inches.

There are many other plants with a full palette of color. Linaria alpina of course is perfectly in scale and gives the heat right back with its orange and purple coloring. Strange to think it comes from the Dolomites and transfers so easily to our lower levels.
Some of the all-stars are truly a bit large for the rock garden, but I cannot resist them. Gentiana asclepiadea is tall, so it peeks out from the woodland garden. The poppy, P. somniferum, is totally out of place. I let it reseed into the path. I want it but have yet to find its proper place.

While thinking of summer heat I must note the Zvolanek Garden is just amazing. Even though so far, we rival the hottest summer for these parts in 105 years, the plants are absolutely cheerful. Keep in mind this is a raised bed filled with crushed stone. That's it. Any seedling soil was washed clear before their plantings.We are talking kabschias and primulas, which were always fussy for me before this construction. Recently I noted an error to my previous idea that the area received no direct sun. As the sun is setting, maybe an hour before, the sun casts it light to the rocks. Then it shines.