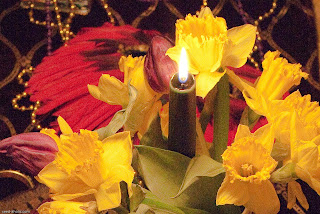 Mardi Gras came late this year. It did, however, portend the beginning of the end for this long, cold winter. As that week began, there was rain, buckets of it- over 4 inches one day- on top of several feet of snow. Yes the basement flooded, as well as the every local stream and river. Yes, trees branches broke, black ice coated the roads on the way home from work, and mud season reigned. Luckily we still made a party of the day with a great potluck feast - Shrimp Etouffee, caramelized onions, candied beets. Of course there was King Cake for the finale. No, the prize was not found, but, hope flourished for a good year.

The snow pulled back near the east side of the entrance wall. A few galanthus immediately showed the spring in their step. They arose in bud and then bloomed tall the minute the sun shone upon them. I left for work in the gloom of the early morning. The clouds left in the afternoon. When I returned home from work they greeted me. They had been hiding under their white blanket all along!
The galanthus lifted my spirits. Even with subsequent dustings of snow, they made their presence known. And the greenhouse kept spirits high with the intoxicating ongoing display by Camellia japonica:
Bright colors mean a lot to me this time of year. "Exotic" or strongly colored - hmmm - there is no contest. South American bulbs like Tropaeolum tricolorum and South Africans like Gladiolus alatus are easy to grow. During the summer, just keep the pot inside without water. The show they put on for the month of March warms the eyes.

Outside mud season still includes a bit of the snow cover. This is probably quite lucky. There has not been any of the ice and slush that killed crowns over the past few years. But don't let me speak too soon as the month is not over.

In the meantime, I busied myself sowing the last of the seed requiring vernalization. Chris Chadwell visited the Himalayas this year. His list works by shares, which is a little different than lists. Do you know his company: Chadwell Seeds in the UK? 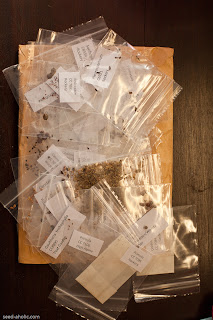 This April/May he will be on the lecture tour for many chapters of NARGS and the Primula Society. He is coming to the Berkshire Chapter for the May meeting. Don't miss it.

The thought of sowing seed brings to mind the flowering of a volunteer in my pots of Narcissus bulbocodium. It is much more robust than the tiny narcissus and several inches taller. These pots of narcissus had been sown over many years - repotted so there  is not telling when it arrived with them. The color is most welcome.

By the 19th, the snow receded to shady areas only. Pop. The galanthus increased their stand by dozens. Pop. The first of the witch hazels joined the rising crescendo. Pop. Helleborus niger added its stunning touch.
The time change yields a chance to walk daily after work. A walk in the woods, down Ivy Mountain Road is still chilling to the bone. But the streams curled round the first of the skunk cabbage hoods.
Back home from the hike, I checked the saxes. I have always penned Sax. sancta as first to bloom. But this year S. 'Marie Louisa' is giving it a run for the money.
Peeking round the beds, to my surprise, Lewisia redivia is emerging, throwing up some fleshy leaves. So I run over to the seedpots and lift the covers. GERMINATION has started! Hope returns...