May launched with a flurry of activity at the APS conference at Tower Hill in MA. Chris Chadwell was the highlighted speaker with a talk on Himalayan primroses, but there was much more. The weekend began with open gardens. The show was very heartening, the sales table enticing and the people knowledgeable and friendly. For me it opened a whole new boulevard on the path to understanding the nature of things. Life is never boring!
Open gardens:
It was difficult to get away on a last glorious day in April to visit another garden, but I managed later in the day. First I reached Bruce's garden. We met originally at Wrightman's trough workshop a few years back. And he has come to some BNARGS meetings. The rock garden is coming along nicely. The crevice troughs are also holding up better than many I have seen. Other "vista" gardens are in planting phase. It is a large property with many avenues of interest.

Then it was onto Peter's. There is a fabulous collection of species paeonies, but none were in bloom yet. Buns are always a treat to see and there were many. He also had a nice collection of daphne, the best seemed to be the prostrate form of Barrie Porteous. Alas it was too late to make the last garden.

The evening kicked off with dinner at Matt and Joe's. What a treat! Delicious gourmet food with people who talk plants in a glorious setting. Whew!
The next morning the conference got down to business. Ahem...I mean in addition to the plant sale (which was irresistable). Judging commenced before all the entries arrived. So there were some very nice decorations outside the show.
The show had plenty to offer. Here are a few that caught my eye:


Seeing Tower Hill for the first time, or maybe just since the additions, was an eyeful. It is not often in these times to see elegant construction in botanical haunts.


It was a very satisfying weekend- old friendships revitalized, new ones made, plants for the garden, a cornucopia of ideas garnered from the talks. The first thing to do upon arrival home was to run around and look at the primula blooming in the garden. Yes, I do love them all. Of course, now initialed to the show bench, I will need to be more precise in my labeling. And it will be a good idea to check plants to see if the bloom matches the label. 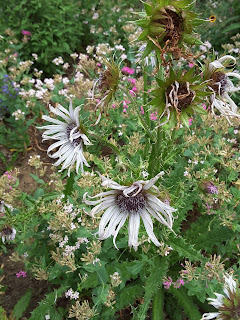