Steamboat Springs is a pretty sleepy little burg during a summer week in July. Sure they have mountain bike events that raise the populace after work. But weekdays no great mobs of people pour out onto the streets. On the weekends though, there is always something happening for the tourist. Yes, I mean those less adventurous tourists who don't go out bike riding or rafting, like me.
For this particular traveler, the right scene was a botanic garden  - the Yampa River Botanic Park, to be precise. The location is a bit out of the way. Main street had mobs of people coming into town, but luckily I was already there. The trick was not missing the turn to the side street. After following it down and around one parks at the end of a very-residential street and walk past the playing fields. On this Saturday morning, the boy's soccer teams were fully absorbed in the ball. What fun they were having! 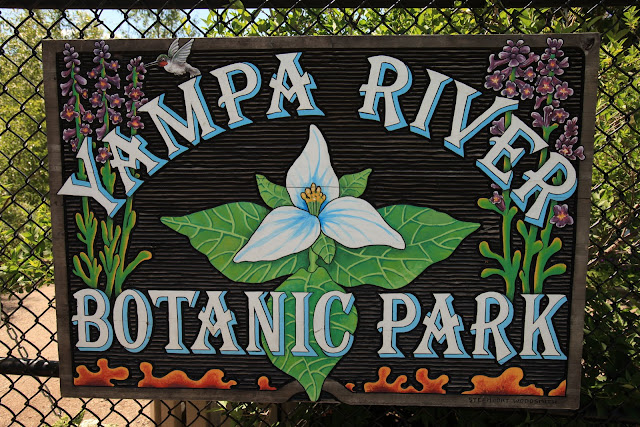 After paralleling the river a bit  I came to a little gate where I entered the garden. One would have no idea about the marvelous treat inside. So I slipped open the gate and inside like some errant Peter Rabbit. Someone in the area planted a magnificent garden, ripe for the looking. There were trees by the gate which revealed a shaded woodland garden.
I presume this to be the western version of our May blooming Aquilegia canadensis. The differences are not particularly apparent. But definitely, it was not the Colorado state flower Aquilegia caerulea.

The rock garden was next on the walk. Astounded that I would find such a flowing rock garden in the midst of this very winter resort town in the mountains of Colorado, I was stopped in my tracks. Bloom was peak!
It was great to see so many of the plants I watched flower at home in May and June, in full glory here in July. It left me with the same taste as a second helping of dessert.
There were paths where one might explore the finer points of the plantings.
At home in Goshen, Cerastium is all but un-growable. No it's not the climate. Rather, a nasty little pest makes a messy dinner out of every plant. What a treat to see it flourishing.
This broom, though, should be worth trying at home. A Plant Select winner, it seems quite vigorous in this alpine climate. How lucky those Colorado gardeners are to have their Plant Select recommendations, which introduce some very fine plants to the area.
Now this little cutie I recognized immediately. As I departed home in Goshen, I noticed it in full bloom in my garden. Dracocephalum ruyschiana is an easy and reliable do-er. Just when the rock garden is winding down, it puts on a cool display.
Somehow eriogonums never quite flourish with this much bloom in our eastern gardens. Sigh. Instead we see much more of the leaf, which is architectural enough for any garden. But seeing it interwoven as a thread in this garden with dianthus was inspiring.
While travelling along the highways we saw variations in color for this eriogonum. I thought they might be different sub species, but not so named in this botanic garden. No matter what the name, this color is very appealing to the sensibilities.
Another native seen blooming all along the highways, castilleja, was also present in numbers here at the garden. I have tried this plant so many times to no avail. It takes one breath of our East Coast fungus filled air and asphyxiates. I can only appreciate it as a tourist, but that is fine..
Moving on down the proverbial garden path, there is more classical structure - bedding plants and a water feature. Just look at the color!

Behind the lane lined with tall evergreens, lies the cactus garden. I must admit my surprise that it would be shaded for so much for the day. But the plants seem none the less for it.
On the opposite side of the park was a variety of little gardens. My favorite was the Penstemon Garden. It is always so difficult for me to sort out the species. Here they are labeled for my script.
But color does not seem to be part of the naming equation. Help - P. aridus is labeled for blue and red.
Maybe it's a hybrid? Anyway, the net result is a name, which is more than I knew before. And there were more name tags to be seen. Great little garden! What is it about knowing the name? Why, ordering seed or the plant of course. It is one thing to drool, but better yet to go home and know what to grow.
I will admit I do grow a few of these species at home. Now I know how they can look, given fresh mountain air at 7,000 feet.
Labels: Yampa River Botanic Park