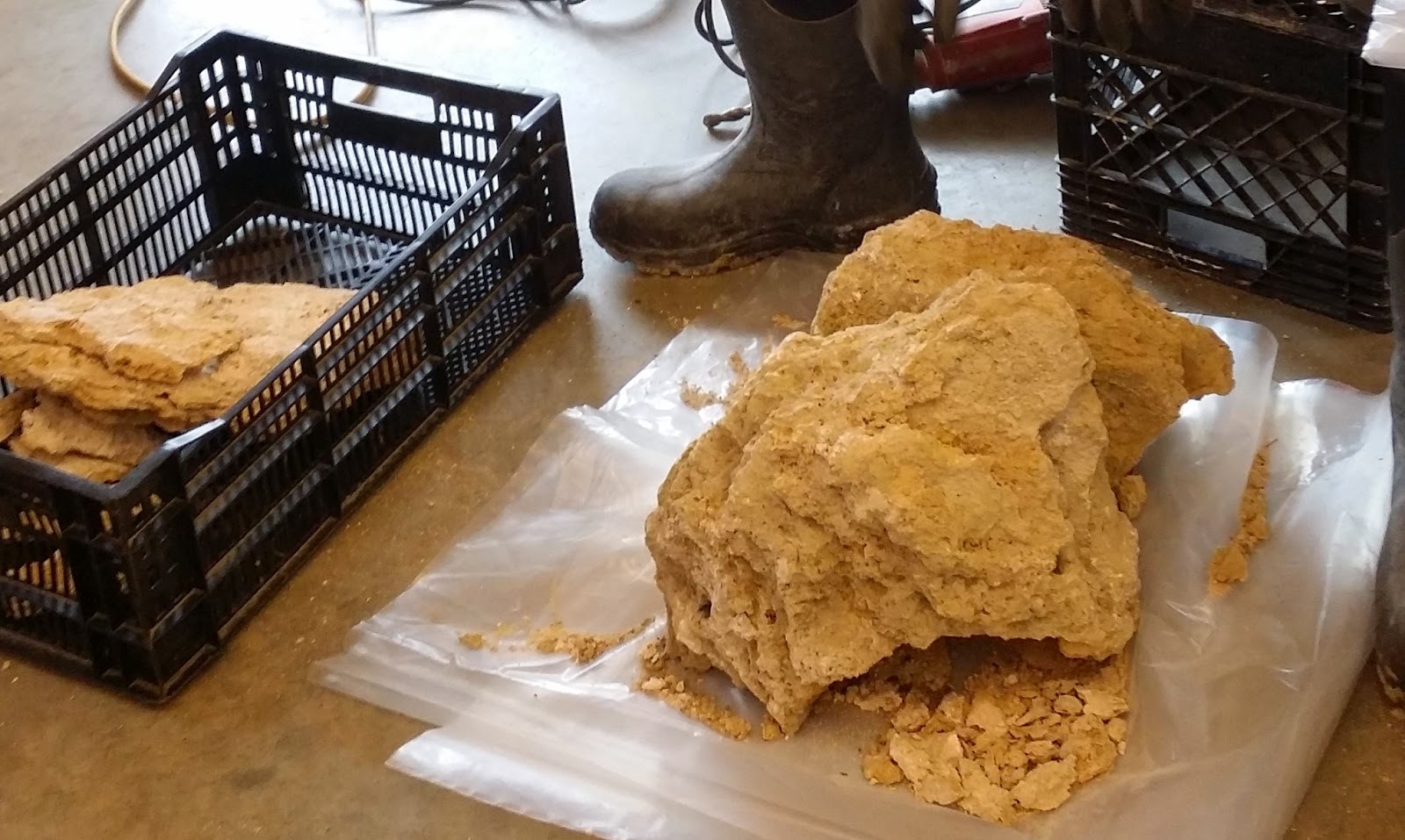 A couple of years ago I attended a tufa crevice workshop at Robin's led by Harvey Wrightman. Fortunately for us he brought lots of tufa rock. "Tufa", you say, "What's that?" Okay, think of what accumulates when hot springs leach out limestone. We're talking in earth building times, not overnight. It's a very porous material that accumulates. Think Illion Gorge in New York or maybe Mackinac Island in Michigan, or other places in B.C. with funny limestone mounds. Essentially it is precipitated material, either biological or chemical, of Calcium Carbonate, CaCO3. Sure there can be other materials in it that cast a different color to it. And notice it's not just hot springs spouting. It also happens in freshwater streams. Don't you just love how the metabolism of algae, bacteria and mosses play the part in a biological formation? Once I found a handful in a fast moving stream in the Adirondacks. It was hard but crushable. And it's not something you can find on Google Shopping. So for Harvey to haul a truckload for us was in of itself, a wondrous thing.

That workshop drew people from five states. Such was the rarity of the opportunity. We had a wonderful day for it, and all went home well satisfied with their prizes. So last year when I asked BNARGS, my local rock garden chapter: "What kind of programs do you want next year?" the response came - "Workshops in April." Thinking back to that previous wonderful day, I arranged for the return of Harvey and "The Tufa Crevice Workshop." Lucky for our chapter Dean, one of our NY members, was able to bring a truckload of Illion Gorge tufa. Wohoo Dean!

Harvey's knowledgeable wife Irene came to enlighten the chapter about using the cuttings. And to complete the picture, Rod came with the fire clay and tools for stone splitting and drilling. We were happy as pigs in mud, er um, clay. 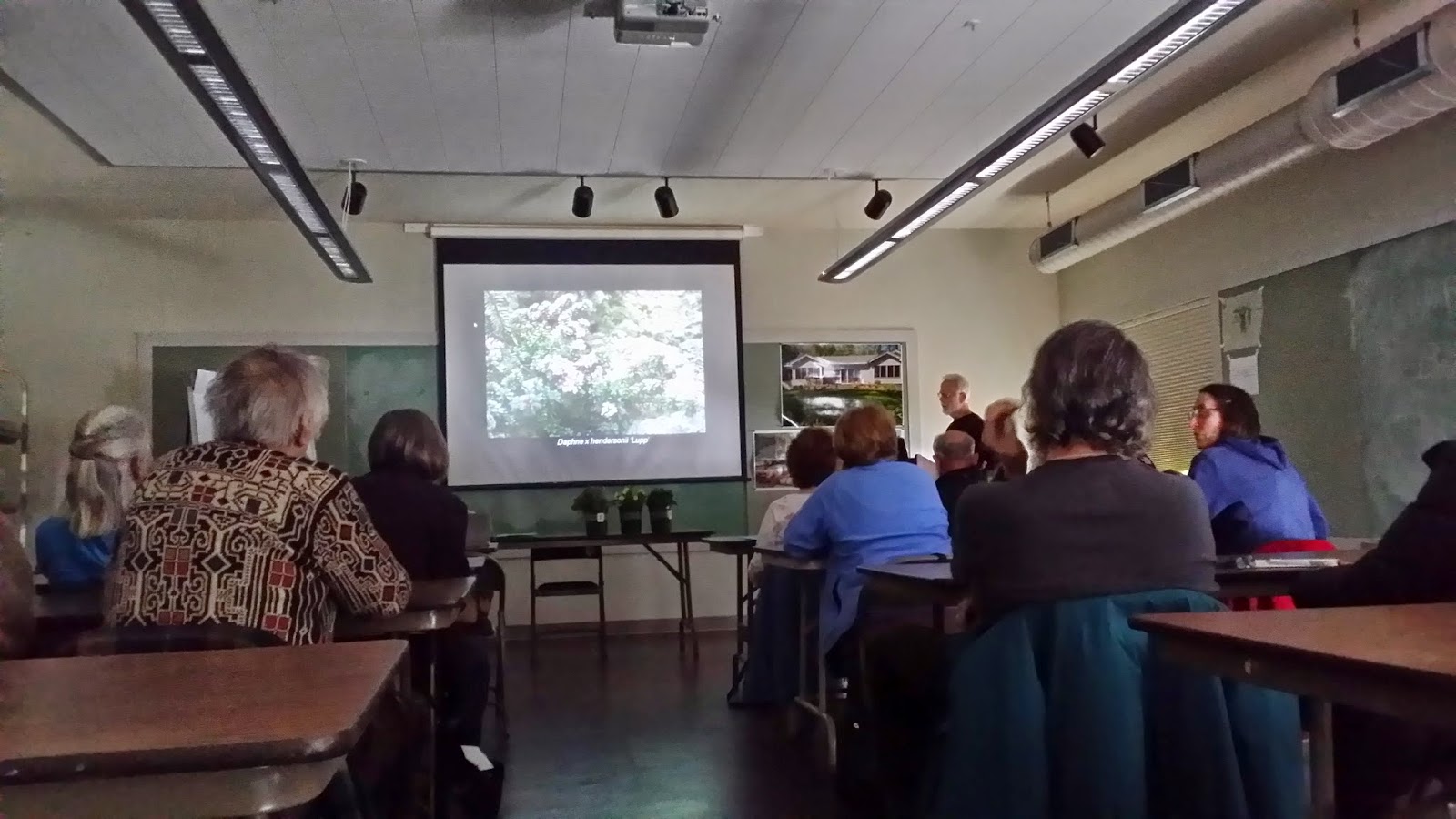 Harvey gave an inspiring lecture including how-to plus inspirational slides before the hands on session. So everyone raced to the tables the minute the lights came on to start picking up their ingredients.

Anne arrived with a couple of massive pieces of tufa for Rod to split or drill. So she set him to work right away while she picked out cuttings and plants.


Oh yes, and Wrightman Alpines came prepared for plant lusting rock gardeners with many flats of deliciously exotic plants. Not all were to go into the tufa!
So the deal was to fill crevices (man made or drilled) of tufa with fire clay and plants. Then stick it in a trough. Or take it home and plant in one's garden.
To reasonably expect this idea to work, one really needed rooted cuttings, and Irene provided them. She served up many flats full of saxifraga, primula, androsaces and other choice gems. All were lined out in meticulously straight rows, roots healthy and starting to wander. I felt guilt as my fingers disrupted the neatness of each tray.  Rod mixed up the clay with water with his special spiral blender and got us all started. There was no additive, as something like sand will wash out quickly. Each of us worked with a generous dollop of the clay, some split tufa, cuttings, and whatever soil mix we procured for the planting.


First I picked out likely fitting stone from Dean. It was childhood building with blocks: turning the rocks over and over until I felt a click. Turned out I picked out more stone than would fit in the trough, but no matter, it could go home with me.


The largest piece I had Rod split crevices in a couple of places. Then using the trowel, I smeared clay on one side.

Next I laid on the roots of the cuttings, adjusting the crowns exactly at the top, and smushed the sandwich closed. What a lot of clay overflow. And then I had missed some places so I tried to add clay. Nope. Open the sandwich back up and add the clay. Working  the clay was a bit like dough. You wanted it to go on smoothly like icing, but not fall off the stone when you applied the crevice.
After the plants were interned, I put in the soil mix to stabilize my little mountain. One can never pack the soil too tight around the soil. I used a flat iron and pushed. Giving it a once over with my eye, there seemed to be more room for foliage.

So Rod drilled a few holes. I pinched off a mound of clay, laid cutting roots on top, and shoved it in. Whew.

Have you ever looked at something you are working on and knew it needed more? This trough needed more green. I discussed it at length with Irene who reminded me all evergreens grow large. Successfully deconstructing a trough is always a feat. But I was reminded of a few in troughs at home that stayed no more than four fingers high. So though it gets big, I added one to the side, keeping my fingers crossed. Perfect. 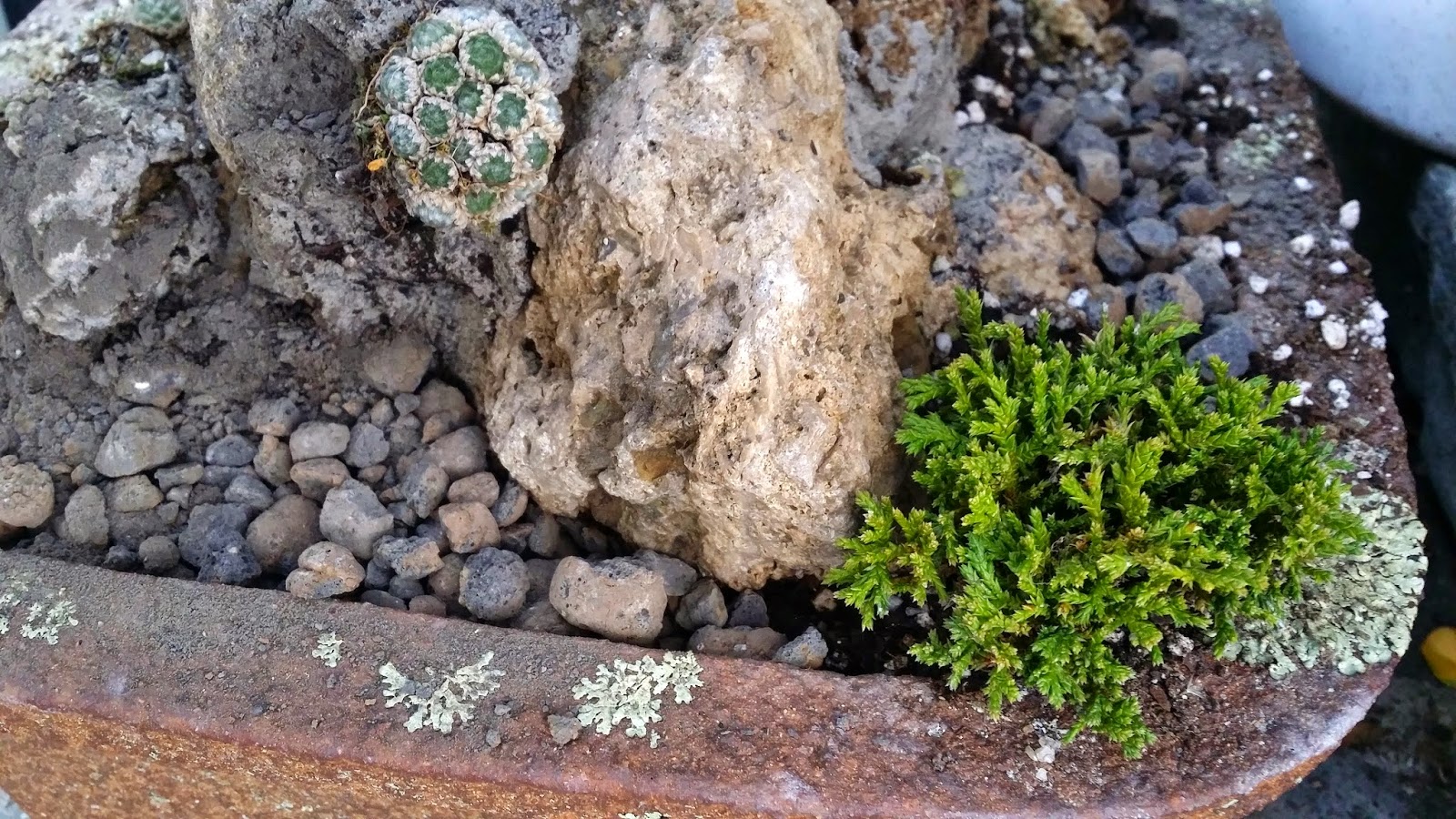 I returned home with extra tufa, plants and my new treasure. Then I watered it lightly. 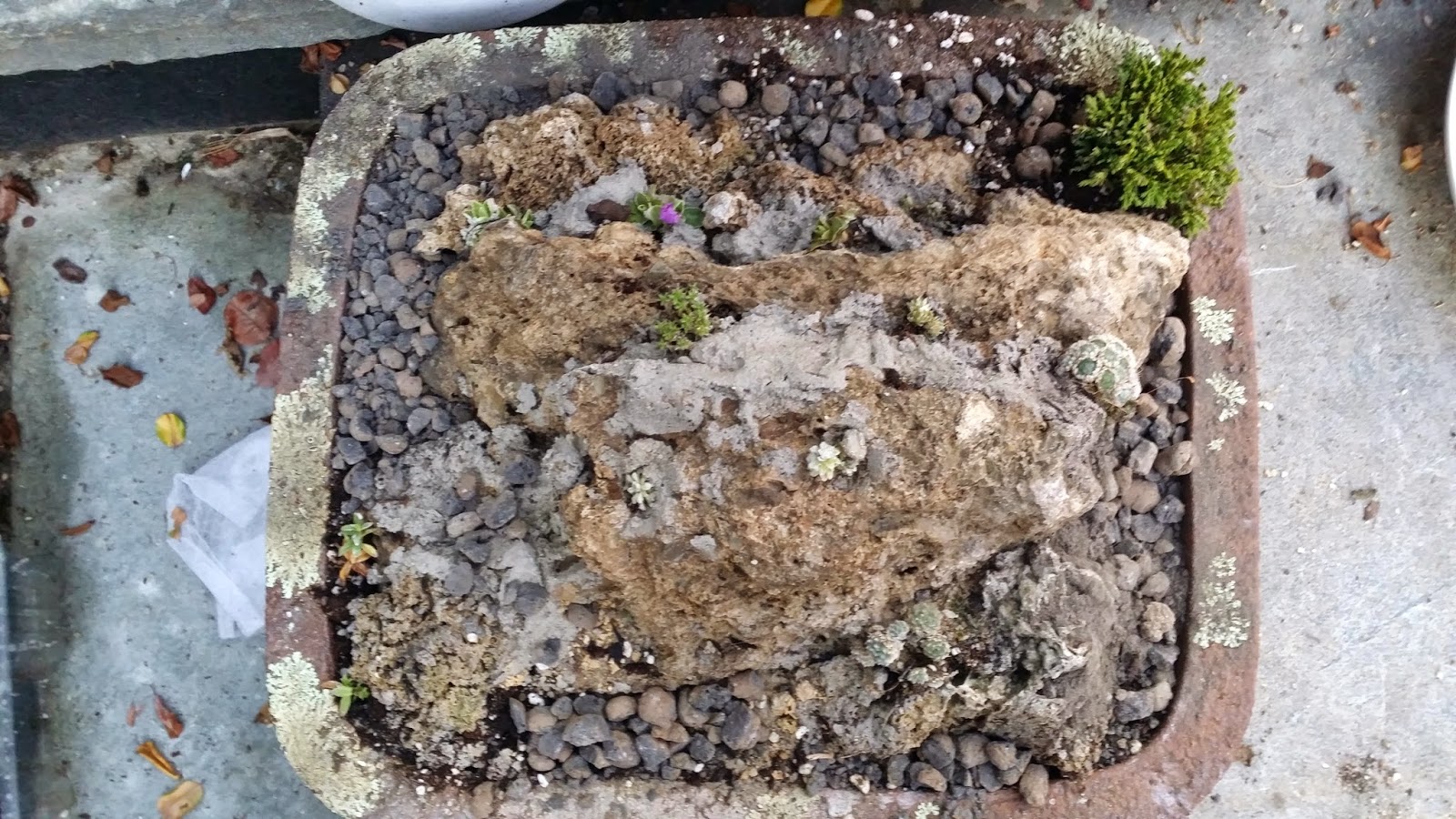 There was too much clay. So I began scraping it off but to no avail. Of course, the plants will overgrow it in time. But for my next adventure, the clay will be applied in a little more sparing method, maybe injected? Still - lots of fun! Do give it a try.

This trough will sit in the garden in a brightly lit area. It is like a tiny mountain filled with treasures. A pleasant reminder of past alpine hikes.