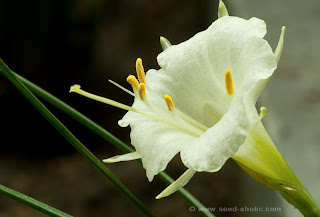 Happy New Year! The blue moon has ushered in a crisp first day of the year with a dusting of snow. More seeds arrived so there is much to do. And during the holidays, task accumulations grew in the shadows. There was so much going on I almost missed little Narcissus cantabricus coming to flower. It germinated several years ago ('06) from NARGS seed (second round). If you are not familiar with the second round of the seed exchange, listen up. If you order from the first round (donors can choose 35 packets, non-donor 25) you get another opportunity for the leftovers. First round usually has over 4000 listings from which to choose, all for $15 USD., equal about 60 cents per packet. Yes, you are required to be a member of NARGS. But you should anyway. As Norman used to quip "All the best gardeners are." So after the first round is finished, you may order a large number of packets at a very nominal cost from the leftovers. It allows one to experiment. Hence, I tried the narcissus pictured, which is not hardy outside for me. The scent alone on such a winter's day makes any trouble worthwhile. What a joy. The first round of the seed exchange is open until February 10, 2010. Note that means you must have your order in the hands of the volunteers by that date. For a view of the seedlist go to NARGS 2009-10 Seedlist

The gifts of Christmas Bûche were much appreciated. It was duly noted that skirmishes broke out for the last mushroom. So to prevent further ado, I am providing directions. Everyone should have as many mushroom candies as they can make! Mastering mushrooms is not at all difficult. The hardest part is waiting until they are finished to begin devouring them.

Beat the egg whites until frothy. Add the cream of tartar. Continue beating until stiff. Gradually add the sugar. Beat until smooth. (You may fold in a little vanilla extract or other flavoring at this point if you choose.) Pipe the cap and stems individually onto a baking tray covered with baking parchment. Bake at 200 degrees F for an hour and a half (less if convection) until firm to the touch. Let stand in the oven overnight. You may store in airtight tins until ready to assemble. 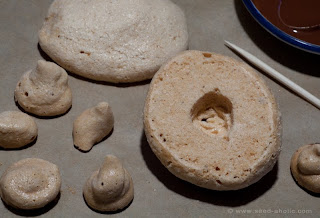 1 bar of the finest dark baking chocolate you can afford, melted
meringue caps and stems

Hollow out the underside of of the center of the caps. I use a bamboo skewer. Fill with melted chocolate. Attach the stem and stand upright. When all mushrooms are assembled, store in a dry place until use. 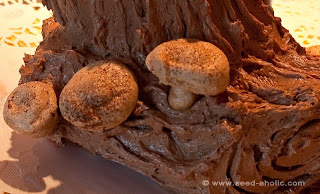