My first encounter with this gem of a genus came just after I joined the North American Rock Garden Society. I volunteered to help bring some plants and set up tables at the annual meeting the Connecticut Chapter sponsored in Hartford. For those of you unfamiliar with these events, amazing specialty plants are raised for sale to a very discerning and knowledgeable group of gardeners. I was tasked with carrying in some of these rare plants and helping unfold tables. Up to that point my interest in these events with lectures, dark rooms with slides, and esoteric study, was minimal so I thought annual meetings were not for me. But when I saw the ballroom filled with plants, something clicked. My mouth must have salivated. An avuncular man who received the plants from me noticed. We started talking, one thing led to another, and I left with one of his personal plant donations in hand. Amazing.

The plant was furry silver rosettes with hot rose tiny flowers in clusters waving above a tag labeled: Androsace sarmentosa 'Chumbyi'. The man, I later met, was H. Lincoln Foster, the apostle of American rock gardening. This Himalayan native plant is still thriving in my garden after all these years, in spite of poor conditions, moves, and lack of attention. Currently situated on a raised limestone bed, the mat spreads by stolons, but is not a thug. Propagation is easy, turns out. Just pot up one of the multitude of rooted stolons as it creeps outward. It is not only for raised beds - try spilling it out of a retaining wall.

As long as it has some moisture at it roots and good drainage at its crown, it gives a wonderful performance. This could be said generally for the whole genus. Yes, there are the meadow dwellers at one end of the spectrum and the full-sun scree dwellers at the other. Most work well in troughs or raised beds where they form buns or mats. And they have sweet little flowers. Even the so called 'weeds' of the genus have a place in my garden. The hardy annual A. septentrionalis grows in waste areas- in sandy paths, without any attention on my part. Most of the year its little toothed rosette is inconspicuous. Then come the fireworks. Who could do without it as you walk the path?

One of the easiest plants for the garden is a hybrid developed by Linc Foster. Androsace 'Millstream' is a cross between carnea and pyrenaica and named for Foster's famous garden in Falls Village. While the garden has proved ephemeral the plant is still carried in the trade (Mt Tahoma, Writghtman, Olivers, Sunny Borders just to name a few). Be sure to include it in a trough or raised bed.

New to me from the sales tables, and another good plant for troughs, is Androsace mairei. It took a little while to get going. In fact I thought it was gone and placed a phlox in its place. To my surprise it came on like gangbusters. The phlox is a little crowded (and I will try to move it this spring), but still managed the odd flower. Like all its kin, it performs with a smile.

To know and to grow-
Growing from seed is sometimes just a matter of patience with this genus. I prepare small plastic pots with my usual seed mix -Metro or Jiffy Mix cut with grit on top of a one inch layer of expanded clay shale. The seeds are usually sown on top of a thin layer of chicken grit as they are, for the most part, very tiny and fall quickly into the cracks. Larger ones get another sprinkle of grit on top. After an overnight soak of the pot in the sink, then it's outside with a quick prayer for snow. If germination is sparse, I leave the pot for a second year. Otherwise, I will prick out seedlings as they appear and pot them on.

Seeds this year look full of potential. The following photos represent several of the major groupings for the genus. I noticed so many similarities between them 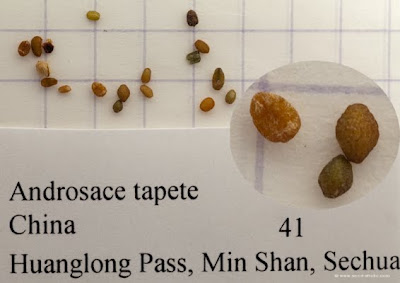 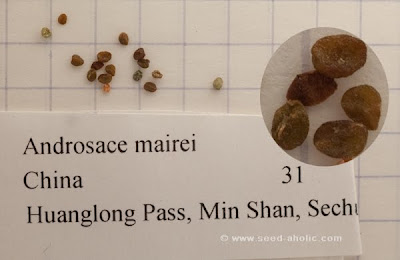 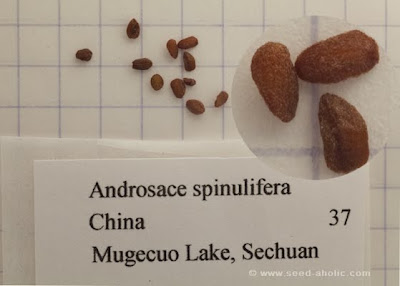 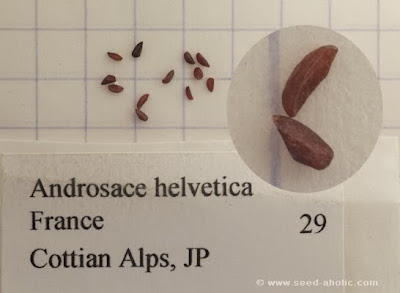 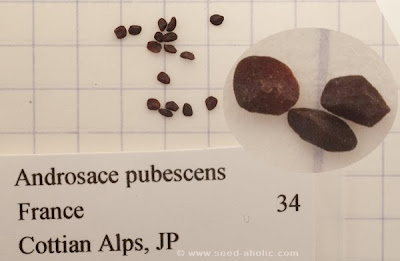