A Week of Blue


Winter saved its gray for the last of February. This week is full of snow and or rain, followed by, snow and rain. Then, we can expect another helping of- can you guess- snow.. and or rain. We might even get some fog thrown in between. But, it is good for pots of seed outside: the Litchfield Hills snow cover. Welcome.

While working in the greenhouse this past weekend, I noticed a visual change in the coloring. The lachenalias and narcissus still rule, with a golden yellow, but the blues are building with bravado. Tropaeolum azureum, which is having a splendid season, is starting to open. This South American climber picks its way up a trellis and cascades thickly. There were some losses this year in the greenhouse when an automatic vent failed to close, but this nasturtium was not among them. It picks up the color from a fading Tecophilea cyanocrocus violacea (another SA native) and blows it banner wide. Blue is good.

Continuing with my study of the Primulaceae, we move on to more photos of seed. These are what seem to be allied genera (to me). I was interested to see the cortusa seed looks much like the androsace. The scale here is one square equals 5 mm. 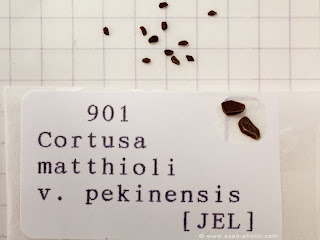 Cortusa matthioli pekinensis
Although cyclamen have been recently kicked out of the Primulaceae family, it is hard for me to cut it loose. I still sow the seed in the same manner with all my selections from that family- soak overnight and plant dark and in this case, with a good thick cover of grit, since the seeds are large. Two species are hardy here, though Cyclamen coum not always, and must be sited in avery protected microclimate. I believe its our wet-snow, no-cover-with-ice cycle spring that it dislikes. I know that it seeds easily within an hour of here, in the lowlands nearer the shore. It is probably a zone or two warmer down there and gets just rain when we get ice. The exquisite leaf forms make any successes worth the effort for a special spring. 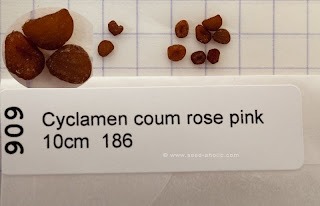 Cyclamen coum
Cyclamen hederifolium does the same for fall. And it is much more amenable to whatever the weather wishes to throw our way. There is a colony started in the company of spring ephemerals in the shade of a maple on our south side. In Autumn when the spring flowers have disappeared, up pops the hot pink cyclamen. It is a bit of a chore to keep the falling leaves from burying the blooms. But late in every fall I apply a good helping of shredded leaves. 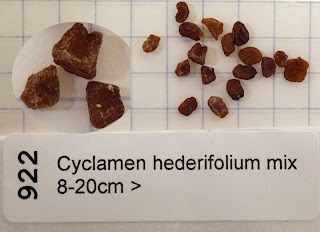 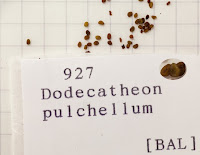 Dodecatheons are still welcomed in the primrose family. But given the look of their seed, I would not be surprised to see them vacated next. I had trouble getting them acclimated here until I placed them in the grit bed. Now they are very happy. Dodecatheon meadia is native to the East Coast.
Labels: Cortusa matthioli pekinensis Cyclamen coum Cyclamen coum Cyclamen hederifolium Dodecatheon meadia Tecophilea cyanocrocus violacea Tropaeolum azureum