The Early May Magnolia

A few days before the beginning of May, Magnolia x "Elizabeth" began opening flowers, lighting candles of creamy bloom. A beacon of delight, it caught one's eye, regardless of the driver's intent to stick to the rules of the road.  On Saturday, May 1st, choosing to hear an excellent lecture program at BNARGS from the AGS's own Cliff Booker, I strayed from its command performance. In the unseasonable heat of that day (July weather for sure) it puffed its remaining buds and sighed them open. What a spectacular sight when I returned home later that day. I thought it could not last, but a cold front blew in from the north, and extended the performance. Why yes, that cold front did also bring hard frost. The tops of the Japanese maples are still crowned with brownout. But the magnolia held its own. 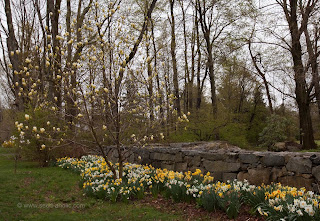 I first saw this splendid tree in the garden of (the late) plant guru Dick Redfield. He sited it against a house wall to provide a little extra hardiness. Probably about 20 feet in stature at the time, it had an upright habit. Dick smiled when I noticed it and added it had come from the Brooklyn Botanic Garden. Magnolia acuminata was crossed with a species from Yulan, M. denudata. The Chinese species has been cultivated near Buddhist temples for over a thousand years. My heart was captured.

Do you know Dick Jayne's excellent nursery, Broken Arrow, in nearby Hamden CT? It is not a far jaunt down Route 63 from Litchfield county and well worth the travel for the delights that can be discovered there. About six years ago (plus) we visited and acquired a nice bushy little specimen of this magnolia. Back home, we sited our little treasure in front of the stone wall. Hopefully all that nearby biomass would protect it from the late frosts. And so far, though warm winters are increasing, the wall has provided sanctuary. It is now about fifteen feet with a spread of ten.

This magnolia ends the season for the front road display that Magnolia stellata began almost a month and a half earlier. Each blossom is precious to me, and I am tempted to bring inside for a closer look. Though the tree soldiers on with a blossom here and there after the leaves emerge, and even into June, the show winds down early May, but long enough to highlight the nearby Daphne genkwa..

So ok, we are living a warm spell now. Who knows how long before we revert back to the frigid dips of the 1990's. What a great opportunity to experience this magnificent tree. Maybe by the time we do get a real winter again, this tree will be established enough for a real zone 4 Goshen winter. 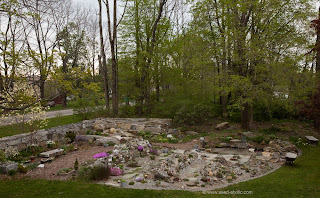