While Rod and Ed prepared the new crevice beds, I designed the plantings. This southern exposure should give me the necessary sun to grow western favorites as well as Turkish gems. Well, actually, this should allow me to get creative with a whole new index of plants requiring a different climate. Microclimates are a great benefit of the stone crevices. And I intend to push. 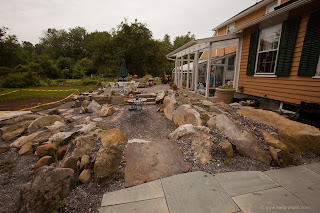 My first orders of acantholimons, genistas, daphne and cactus were swallowed up by the overall view as they were planted. Amazing how many little plants it takes to fill a crevice. You do get to plant the sides, the top, and sometimes even the underneath the stone. I am holding onto one special little overhang to try a mass planting of something special when it comes my way. By the first week of May, I moved in a little over 400 plants. Whew! 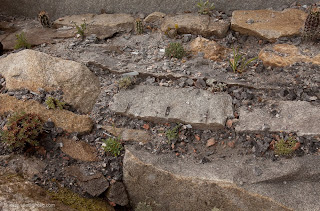 Meantime, Rod and I spent the month, during every spare waking moment, finishing the base area. Yes, he was so good- moving two huge rocks out from the wall after he thought he was finished. (Oh how they look so much better!) The scenario would run like this - upon arrival home from work, we would look for the right rock, dig out a place for it, and plant the rock firmly. By the end of May the base was ready for groundcovers. So I moved in the usual suspects - antennarias (diminutive as well as large), paronychias, cymbalaria, dianthus, arenaria, eriogonums, globularia...you get the picture. I am dreaming of adding cuties not usually hardy, like delosperma. There are so many species now to try. Maybe I can finally grow what grows in Denver? 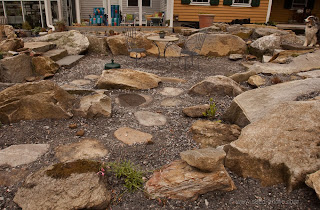 The old garden continued with its progression of unfurling, ignoring us as we worked. This year was a spectacular performance. The Phlox divaricata with Primula veris and Cypripedium parviflorum group put on a color carpet show to rival Aladdin's. The paeonies were amazing, from the earliest P. intermedia and P. tenuifolia, through P. anomala and the tree paeonies, and including P. handel-mazzettii. And the daphnes...well, as well. 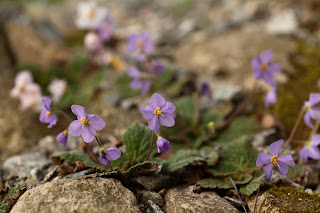 This week's plant show of merit goes to the ramondas - R. myconi and R. nathaliae. The group has been blooming for two weeks now, commencing just as Haberlea rhodopensis started to pass. Even during the strenuous fluctuations in weather, from frost to a hot July day, it snailed its way to glory. I originally grew this hardy African violet relative from seed, back in the '90s. (Not difficult from seed, try your hand and order some from the next NARGS Seedex.) And of course, people would offer me forms, since I was growing the one. And when the one got too fat, I split it to fill crevices. A most satisfactory plant. 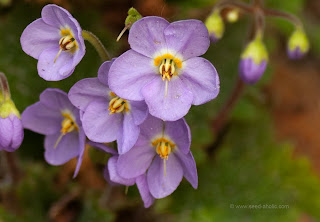 But wait, there are others singing their songs. Nearby penstemons twinkle smiles as I pass... 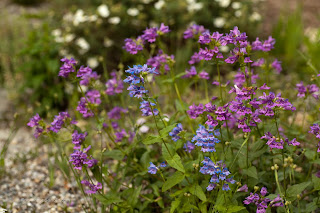