When the snow receded, a few short weeks ago, there was emergence of the usual suspects: galanthus, hellebores, and saxes. The last-of-winter flurries kept their rate of growth to nearly invisible to the naked eye. However, the camera could track them, as it did came the what-did-I-plant-here surprise. It wasn't until late March when I could wrest the tag from the frozen earth that my smile turned to a grin- Helleborus thibetanus made it through this winter. While I grew it at my old garden in a lower altitude, I had yet to have it settle in this one. But the old adage, try it in several different microclimes before you give up, is quite true. Last year, it did not flower, so imagine my delight.

By the first of April, it was standing with bells of color dancing in the wind.
A week later, it stood in its glory. While not as lusty as nearby Helleborus niger or its crosses, its beauty is none the less diminished. It almost makes H. niger look like an overfed cabbage, it is so dainty and graceful. And its leaves are equal in aesthetics to the bells of bloom.

Nearby a cross of a different color (and genus), Hepatica transsilvanica X color contrasted the scene.

In the meantime, a very successful meeting of the Berkshire Chapter NARGS ensued. The morning program with speaker Matt Mattus http://www.growingwithplants.com/  provided inspiration to grow plants from and/or travel to the Alps. Even though he claims, he is not a photographer, his photos are precise, true to life, and very professional. It did not hurt that many of the photos were of our favorite families - primulaceae and saxifragaceae. He and his partner Joe traveled there several times and managed to really capture the essence of the place and its flora.

Another meeting benefit was the announcement by one of our members of an open garden to see a collection of galanthus. To inspire us, she also dug a few for our plant auction. Need I say, it was a very successful donation on her part. And since I was traveling through her town the following week, I made arrangements to stop and see the collection. Originally a specialist compiled it in the UK, and was supposedly the best outside Kew. Then, when a new life was begun by him in the US, there was no place for the plants. The collector had to live in an apartment. So he stopped by the CT home of our member and left her a few presents. She has been moving them to her new homes along with other "essentials". What gardener could resist leaving these beauties behind if there was to be any kind of plot in which to park them!

Originally there were 14 different named plants. Now only the most distinct are recognizable. For me who had only experienced G. nivalis or maybe G. elwesii, this was still an eye opener. G. 'Lady Elphinstone', a nivalis variant, has been a standout since the 1890's. Its double yellow flounce is most charming and graceful. Following are just a few of the stands. 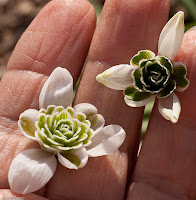 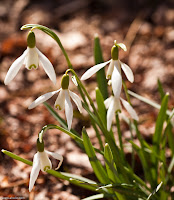 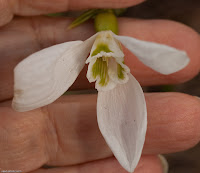 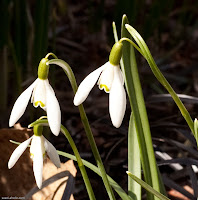 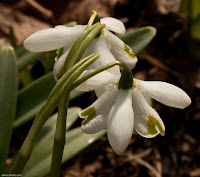 Back home I ran around looking over each stand to see the markings. No, there was not a clear X, more like a mustache.